NEW FLOWER OF THE SEASON-MEERA NANDAN 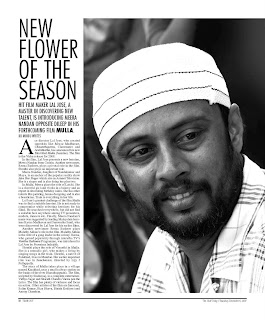 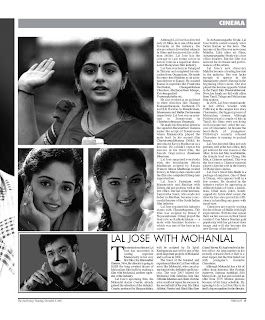 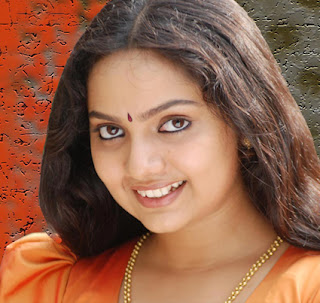 New flower of the season

Ace director Lal Jose, who created superhits like Meesa Madhavan, Chaanthupottu, Classmates and Arabikkatha, has announced his new film titled Mulla (Jasmine). The film is the Vishu release for 2008.
In the film, Lal Jose presents a new heroine, Meera Nandan from Cochin. Another newcomer, Reena Basheer, plays a pivotal role in the film. Shruthi also plays an important role.
Meera Nandan, daughter of Nandakumar and Maya, is an anchor of the popular reality show Idea Star Singer which airs on Asianet Television. She is a singer and is also doing her plus two.
In Mulla, Meera plays the role of Latchi. She is a cheerful girl and works in a bakery and an expert in decorating birthday cakes. She has other talents like painting, henna designing and is also a beautician. Train is everything in her life.
Lal Jose's greatest challenge of the film Mulla was to find a suitable heroine. He is not ready to compromise while selecting heroines for his films. He searched everywhere, but did not find a suitable face anywhere among TV presenters, models, dancers etc. Finally, Meera Nandan's name was suggested by leading Malayalam heroines Kavya Madhavan and Samvrutha Sunil, who were discovered by Lal Jose for his earlier films.
Another newcomer Reena Basheer plays Malathy Akkan's role in the film. Malathy Akkan is the wife of a gang leader in the colony. Reena, who gained popularity through Amrutha TV's Vanitha Rathnam Programme, was introduced to Lal Jose by Poornima Indrajith.
Shruthi plays the role of Vasanthi in Mulla. She is a nomadic girl, who makes a living by singing songs in the train. Shruthi, a native of Palakkad, lives in Mumbai. Her earlier important role was in Sancharam, directed by Lijy J Pullappally.
The story of Mulla takes place in a village named Karakkad, near a small railway station on the banks of the river Bharathappuzha. The film, scripted by Sinduraaj, is a complete entertainer. Vidhya Sagar and Sharath Chandra Varma pen the lyrics. The film has plenty of violence and focus on action. Other artistes of the film are Innocent, Salim Kumar, Riza Bhava, Binish Kodiyeri and Anoop Chandran.
Although Lal Jose has directed only 10 films, he is one of the most favourite in the industry. He always selects diversified subjects in films and has proved his craftsman ability. Lal Jose has the courage to cast young actors in heroic roles in a superstar dominated Malayalam film industry.
Lal Jose was born in Valappad in Thrissur and completed his education from Ottappalam. He made his entry into filmdom as an assistant director to Kamal. He assisted Kamal in superhits like Pradesika Varthakal, Champakkulam Thachan, Mazhayethum Munpe, Krishnagudiyil Oru Pranayakalathu etc.
He also worked as an assistant to other directors like Thampy Kannamthaanam, Sudheesh CS and KK Haridas in Manthrikam, Maanasam and Vadhu Doctaraanu respectively. Lal Jose was an assistant to Sreenivasan in Chinthavishtayaya Shyamala.
He made his directorial debut in the superhit Maravathoor Kanavu under the script of Sreenivasan where Mammootty played the male lead. In his second film Chandranudikkunna Dikkil, he introduced Kavya Madhavan as a heroine. He couldn't repeat his success in his third film, the Suresh Gopi-starrer Randaam Bhaavam.
Lal Jose surprised everybody with the blockbuster Meesa Madhavan scripted by Ranjan Pramod. Meesa Madhavan created history in Malayalam cinema and the film also catapulted Dileep into superstardom.
Lal Jose's Pattalam with Mammootty and Rasikan with Dileep did not perform well at the box office. But one of the heroines, Samvrutha Sunil, who made her debut in Rasikan, became a successful heroine of the South Indian film industry.
Lal Jose regained his industry status with Chaanthupottu. The film was scripted by Benny P Nayarambalam. Dileep played the lead role as Radhakrishnan — a male with feminine features — which was one of the best in his career.
In Achanurangatha Veedu, Lal Jose boldly casted comedy actor Salim Kumar as the hero. The heroine of the film was newcomer Muktha. Like other art films, Achanurangatha Veedu was a box office disaster. But the film was noticed for its theme and performances of the artists.
Lal Jose's new discovery Muktha became a leading heroine in the industry. She was lucky enough to appear in the Mammootty-starrer Nasrani in the beginning of her career. She also played the heroine opposite Vishal in the Tamil film Thamirabharani. Now, her hands are full with offers from Tamil, Telugu and Malayalam film makers.
In 2006, Lal Jose created another box office wonder with Prithviraj in the campus love story Classmates, the biggest grosser of Malayalam cinema. Although Prithviraj had a couple of hits in Tamil, his films were not doing well on home turf. After the success of Classmates, he became the heart-throb of youngsters. Prithviraj's recently released Chocolate is running in packed houses.
Lal Jose directed films not only perform well at the box office, they get noticed for one reason or the other. In his last film Arabikkatha, the female lead was Chang Shu Min, a Chinese national. This was the first time a Chinese national played a heroine role in the history of Malayalam cinema.
Lal Jose's latest film Mulla is a package of surprises. One of them is Dileep, who appears bald in a few scenes. He dazzled in the industry earlier by appearing in different kinds of roles; a henchman, blind man, joker, handicapped etc. In his short career, the director has also proved his efficiency in handling any genre with equal ease.
Cinegoers are eagerly waiting for the release of Mulla with high expectations. Will the duo repeat their earlier success in their latest venture? Can Meera Nandan gain popularity with her girl-next-door image and will she become the new flavour of the industry?

Lal Jose with Mohanlal
The meticulous director Lal Jose has succeeded in casting superstar Mammootty in his very first film Oru Maravathur Kanavu.
Now, the director is going to fulfill the long awaited dream of Malayalam film buffs by making a film with Mohanlal, another superstar of the industry.
Lal Jose's upcoming film, the Mohanlal starrer Cousin, already gained the attention of the industry. Cousin, produced by Bhagyachithra, will be scripted by Dr Iqbal Kuttippuram and will be one of the most important projects of Mohanlal and Lal Jose in 2008.
The bond of the talented and experienced director Lal Jose with an actor like Mohanlal, who can play any kind of role, definitely spells success.
The year 2007 started for Mohanlal with fabulous hits like Chhotta Mumbai and Hallo. But the actor could not repeat his success in the second half of the year. His films Alibhai, Pardesi and Hindi film Ram Gopal Varma Ki Aag bombed at the box office. An item number in his recently released Rock n Roll is a chart topper, but the film faded out with youngster's favourite Chocolates.
Although Mohanlal has a lot of offers from directors like Roshan Andrews, Sathyan Anthikad, Sibi Malayil etc., he has put on hold an offer from UTV Motion pictures because of his busy schedule. By agreeing to do a Lal Jose film is in itself a big recognition for the director.
Posted by KK Moidu at 11:16 AM

So recommendations work in the film field also, right. I don't understand why directors and producers take lots of efforts to introduce new actresses. Why is there no interest to introduce good male actors?

You question has the answer.
do your homework... :D

There is more interest in introducing actresses rather than actors because, there seems to be a shortage of gud actresses in malayalam since all the good ones go for tamil, telungu and other languages after a while...the issue of marriage also comes in between..which made us lose precious actresses like parvathy, manju warrior, samyuktha etc.

Meera nandan seems to hv a lot of the what it takes to be a 'gud actress', lets wait n see!