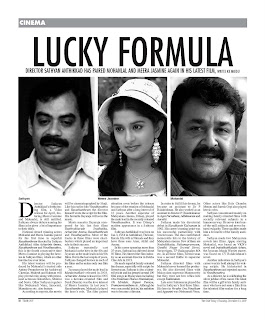 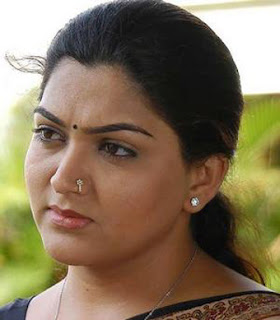 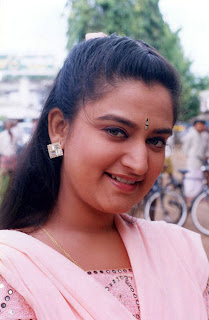 Director Sathyan Anthikkad's forthcoming film, a Vishu release for April, featuring Meera Jasmine and Mohanlal, is still untitled. Sathyan always delays naming his films as he gives a lot of importance to their titles.
National Award winning actors Mohanlal and Meera Jasmine paired for the first time in superhit Rasathanthram directed by Sathyan Anthikkad. After Achuvinte Amma, Rasathanthram and Vinodhayathra, this is the fourth consecutive time Meera Jasmine is playing the heroine in Sathyan films, which no other heroine has ever done.
His latest venture will be produced by Mohanlal's trusted aide Antony Perumbavoor for Aashirwad Cinemas. Mukesh and Rahman will play pivotal roles along with prominent actresses Khushboo, Mohini and Seeta. Other Sathyan regulars like Nedumudi Venu, Innocent, Mamukoya etc. also feature.
According to reports, the movie will be cinematographed by Shaji. Like his earlier hits Vinodhayathra and Rasathanthram the director himself wrote the script for the film. His favourite Ilayaraja will score the music.
Music maestro Ilayaraja composed for his last four films Yaathrakkarude Sradhakku, Achuvinte Amma, Rasathanthram and Vinodhayathra. Most of the tracks in these films were chartbusters which played an important role in their success.
Sathyan repeatedly cast Mohanlal as the hero in the 80s and Jayaram as the male leads in his 90s films. But in the last couple of years, Sathyan changed heroes in each of his films and he makes only one film a year.
Jayaram played the male lead in Manasinakkare released in 2003. Achuvinte Amma released in 2005 was a heroine-oriented film and Sunil (Narein) was the love interest of Meera Jasmine. In last year's Rasathanthram, Mohanlal played the hero's role. The film gained attention even before the release because of the reunion of Mohanlal and Sathyan after a long interval of 12 years. Another superstar of Malayalam cinema, Dileep, played the male lead in the recently released Vinodhayathra. It was Dileep's maiden appearance in a Sathyan film.
Sathyan Anthikkad was born on Jan.3, 1954 in Anthikkad, Thrissur, Kerala. His wife is Nirmala and they have three sons Arun, Akhil and Anoop.
In his career spanning more than 25 years, Sathyan has directed about 50 films. He entered the film industry as an assistant director in Rekha Cine Arts in 1973.
He made superhit family oriented fun dramas, especially with scripts by Sreenivasan. Sathyan is also a talented lyricist and has penned around 100 film songs in Malayalam including Oru Nimisham Tharoo Ninnilaliyan, Oh Mridule, Rajani Parayu, Pranayavasantham etc. Although he was a successful lyricist, his ambition was to become a director.
In order to fulfill his dream, he became an assistant to Dr P Balakrishnan. He also worked as an assistant to director P Chandrakumar in Agni Parvatham, Adhikaaram and Aarathi.
Sathyan made his directorial debut in Kurukkante Kalyanam in 1982. His career's turning point was his successful partnership with Sreenivasan. The duo contributed memorable hits to the history of Malayalam cinema. Few of them are Nadodikkattu, Pattanapravesam, Gandhi Nagar Second Street, Varavelppu, TP Balagopalan MA etc. In all these films, Sreenivasan was a second fiddle to superstar Mohanlal.
Sathyan directed films with Mohanlal never harmed the producers. He also directed films with Malayalam superstar Mammootty but they were not box office hits except Kalikkalam.
Late actor Sukumaran played the lead in Sathyan's first three films. His hero in Veruthe Oru Pinakkam and Appunni was Nedumudi Venu. Other actors like Bala Chandra Menon and Suresh Gopi also played heroic roles.
Sathyan concentrated mainly on making family oriented films with socially relevant subjects in a humorous way. He never tried run-of-the-mill subjects and never featured vulgarity. These qualities made him a favourite of the family audience.
Sathyan made two Malayalam novels into films. Appu, starring Mohanlal, was based on VKN's novel and Irattakkuttikalude Achan, the Jayaram-Manju Warrier starrer, was based on CV Balakrishnan's novel.
Another milestone in Sathyan's career was his bold attempt for writing scripts. He kickstarted in Rasathanthram and repeated success in Vinodhayathra.
As a director, he is celebrating the silver jubilee of his career. His latest film will be a gift to his family audience who have not seen a film from the talented film-maker for a long time.
Posted by KK Moidu at 7:41 PM

hey.... what are you telling...
ORU NIMISHAM TARU NINNILALIYAN.....is not a creation of SATYAN ANTHIKKADU...
ITS A NICE EVER TIME CLASSIC OF THE RENOWNED LYRIST....

'Oru Niminisham Tharoo Ninnilaliyan' was penned by Sathyan Anthikkad for the film Sindooram released in 1976. It was tuned by AT Ummer and sung by Dr. KJ Yesudas.