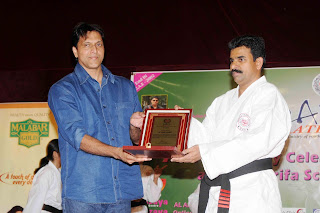 The function started with the prayer and meditation by the students. Shihan KK Ahmed, in his welcome speech, praised the dedication and hard work of students.
Babu Antony said in his inaugural speech, “I got the chance to act in renowned director Bharathan’s film Chilambu 22 years ago, because of my special skills in martial arts. It was my stepping-stone in films.” He requested all the students to continue training in martial arts and use it only in dangerous situations. 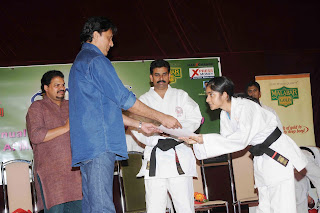 KK Moideen Koya expressed his congratulations to the students and trainers in his felicitation speech. More than 200 karate students, their parents and martial arts fans were present at the occasion. 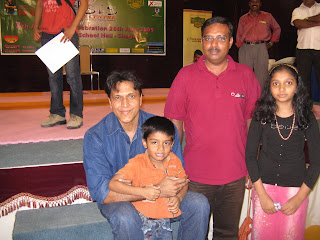 A karate demonstration by 50 karate students including the 10 new black belt holders, headed by Shihan KK Ahmed, showed the basic and fundamental techniques of martial arts like the method of punching, kicking, breaking tiles, defence with knife, sparring etc. 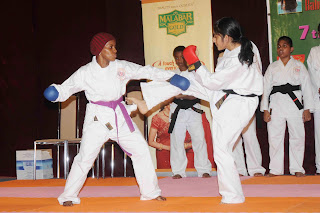 A mind-blowing magic show by Seraj Ummer was another highlight of the function.
Dik Bahadur Magar from Nepal was awarded the IIIrd Dan Black Belt and Indian nationals Mujeeb Rahman and Lijo Varghese were given the IInd Dan Black Belt. Pooja Nair, 14, and Aswathy Ann Mathew, 15, both from India, received their Black Belts.
Tanzanian national Lufe Labib Hassan, 11, Mohammed Basil from Palestine and Joseph Abraham from India were the youngest Black Belt holders in the team.
Teenage boys Akash Ravi and Kevyn Koshy Thomas from India were the other winners of Black Belts. 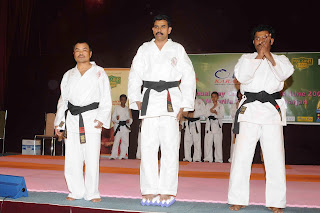 A new black belt holder Aswathy Ann Mathew from Kottayam said: “It is a happiest moment in my life and it was my dream come true. Although my parents do not practice martial arts, I got all the support from them and will continue my training as long as I can.” 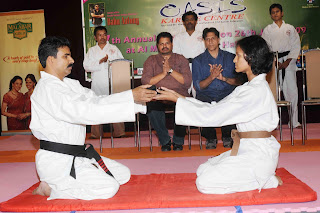 The Oasis Karate centre started in 2002 is giving training for more than 300 students of 30 nationalities in karate, wushu, kubudo, yoga, etc. The students are trained by qualified masters under the supervision of Shihan KK Ahmed who has more than 25 years experience.
Posted by KK Moidu at 6:22 PM