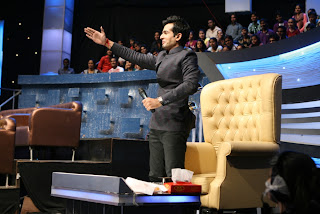 Killing time between shots on the sets of DID Doubles, host Jay Bhanushali decided to get a li’l cheeky and amuse himself as also the three mentors Geeta Kapur, Master Marzi Pestonji and Rajeev Surti by running up to Grandmaster Mithun Da’s chair while he had stepped out for a break and doing an elaborate mimicry of Dada’s signature lines and typical mannerisms!
Jay sat in Dada’s unmistakable ‘bent to one side’ pose, stood up with a start like he often does and vigorously started darting out Mithun Da’s famous Grand salutes and ‘Kya Baat! Kya Baat! Kya Baat!’. Seeing that he had the audience and the mentors in splits with his almost perfect mimicry of Dada, Jay went one step further and started copying Dada’s style of flirting with Shveta and Geeta Ma. Little did he know that when he was halfway into Mithun Da’s mimicry, the man himself had walked back into the studio and was standing right behind the Grandmaster’s chair! 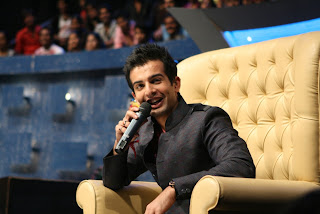 Since Jay didn’t seem to have intentions of ending his tomfoolery, Dada decided to tap him on the shoulder in the middle of his act, sending Jay jumping and running for cover! Sitting on the chair that is rightfully only his, Mithun da said, ‘Jay, never again on my chair! See what I make you do if you come anywhere close to this chair. And watch your back now that you’ve imitated me in front everybody!’ Do we see a trembling Jay Bhanushali hiding below the Grandmaster’s chair?
Stay tuned to DID Doubles every Friday and Saturday at 20.00 on Zee TV.
Posted by KK Moidu at 4:05 PM