1st master class by world-renowned director in the Gulf region
Registration open until March 21 for filmmakers from GCC, Iraq and Yemen
The Gulf Film Festival, the home of contemporary cinema from the Arabian peninsula, will host the first-ever master-class of acclaimed Iranian filmmaker Abbas Kiarostami in the Gulf region on April. The fourth edition of the Festival, held under the patronage of His Highness Sheikh Majid Bin Mohammed Bin Rashid Al Maktoum, Chairman of the Dubai Culture & Arts Authority (Dubai Culture), will run from April 14 to 20, 2011.
The 10-day Kiarostami master class, scheduled for April 11 to 20 in Dubai, is open to filmmakers in the Gulf countries, Iraq and Yemen and will be held in association with Documentary Voices, a documentary festival focused on social issues. Kiarostami, one of the most respected names in international cinema, will provide hands-on practical training for up to 40 participants, guiding them through every stage of filmmaking.
Masoud Amralla Al Ali, Festival Director, said: “We are honoured to host world-famous filmmaker Abbas Kiarostami in Dubai for this master class held in association with Documentary Voices. Having defined his niche in cinema with compelling masterpieces, Kiarostami has a strong command of the medium, which inspires aspiring filmmakers around the world. Our partnership in hosting the maestro highlights our commitment to further strengthen the talent of Gulf filmmakers, and drive the regional film industry.”
Kiarostami, whose career and body of work have drawn more than 70 awards and honours across Europe, the Americas, Asia and Africa, said he is looking forward to getting to know and work with talent from the Arab world in Dubai.
The renowned director will help participants develop a topic and their stories, guide their shoots on location, review their rough cuts and advise them on post-production aspects. The films, each between one to five minutes long, will undergo a final review by Kiarostami, who will comment on each work. The legendary auteur will also screen clips from his films and discuss them with participants, providing unique insights into his style and world.
“Quality filmmaking is possible under all types of limitations, including location, equipment, political and economical; and this workshop is designed to help filmmakers work within the available means,” Kiarostami says.
“This will not be a classical academic filmmaking workshop, but a very interactive one to encourage filmmakers to overcome their fears, frustrations and financial issues and start producing. Enough of lectures, sitting in the classroom or writing, let’s make our films now.” 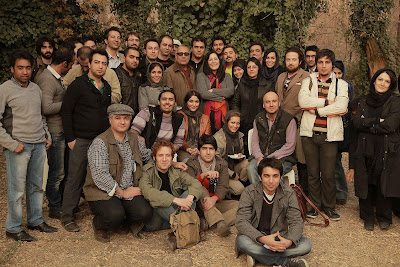 Kiarostami, voted the most important film director of the 1990s by two independent film critic polls, has conducted filmmaking master-classes at top-tier film festivals and accomplished film schools. Films by his students have captivated audiences through their screenings at global film festivals and on television, highlighting the collaboration and knowledge-sharing that marks his master classes.
A flagbearer of the Iranian new wave in cinema, Kiarostami has made over 40 films including shorts and documentaries. His acclaimed films include Taste of Cherry, The Wind Will Carry Us and the Koker Trilogy. Most recently, his film Certified Copy won critical acclaim at the 2010 Cannes Film Festival with its lead actress, Juliette Binoche winning the Best Actress laurel at the festival. His works have also won the recognition of fellow world masters like Jean Luc Goddard, Nanni Moretti, Chris Marker, Ray Carney, Akira Kurosawa and Martin Scorsese, among others.
Registration for the Kiarostami master class in Dubai is available through the websites of the Gulf Film Festival (www.gulffilmfestival.com) and Documentary Voices (www.documentaryvoices.com). Registration will be open until March 21, 2011.
The fourth Gulf Film Festival, which will include a competition for professionals and students from the GCC, Iraq and Yemen and an international shorts competition, is supported by Dubai Culture & Arts Authority and is held in association with Dubai Studio City.
Posted by KK Moidu at 2:02 PM

Your blog is so nice