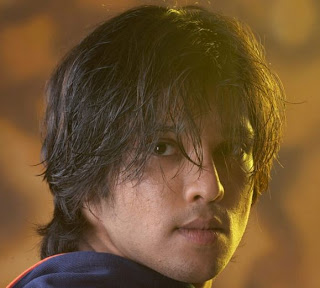 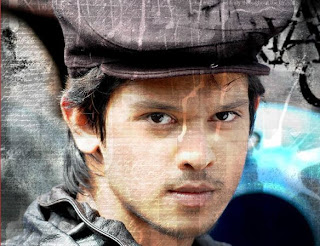 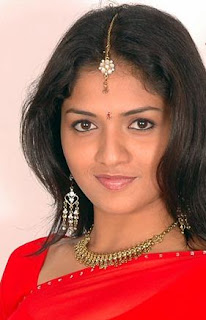 From Boys to hero

Kadhalil Vizhunthen is a romantic action thriller set in the backdrop of a campus. The film tells a love story in a distinct style. The makers of the film claim a special treatment of the subject and guarantees a new experience for the audience. The movie begins with a lot of suspense, where the hero meets the heroine. The story is about a young lover, who lost his girlfriend but believes that she is still alive. Kadhalil Vizhunthen is directed by PV Prasad, an earlier assistant of V Sekar and Azhagam Perumal.
Nakul plays the male lead of the film and Telugu actress Sunaina make her Tamil debut as a heroine. Other important roles of the film are played by Hari Raj, Livingston and Sampath.
Vijay Anthony tunes for the lyrics of young and talented Thamarai. One of the songs Nakka Mukku has already became a chart buster. SD Vijay Milton is the cinematographer and VT Vijayan edits the film. It is produced by Umapathy under the banner of Atlantic Cinemas.
The hero of the film, Nakul, was born in Mumbai on June 15, 1984. He is the son of Jayadev and Lakshmi and former south Indian heroine and Award winning actress Devayani is his elder sister. Nakul made his silver screen debut in famed director Shankar's Boys. The musical hit Boys presented some highly talented artistes like Bharath, Sidharth and Genelia to the industry.
Nakul's co-stars of the film Boys were already established as good artistes in the industry. Bharath is one of the top young heroes of the Tamil industry. Sidharth Narayan is also one of the most wanted heroes of the Telugu industry. He also debuted in Bollywood with the Aamir Khan-starrer Rang De Basanti. Genelia, the heroine of Boys has played leads in many Telugu films and the beautiful actress is the heroine in the recently released Tamil film Santosh Subramaniam. She also made her Bollywood debut opposite Akshaye Khanna in Mere Baap Pehle Aap directed by Priyadarshan. She is the love interest of Imran Khan, nephew of Aamir Khan in the forthcoming Hindi film Jaane Tu Ya Jaane Na.
Except Nakul, all other artistes who shared the screen with him in Boys climbed the ladder of success in the glamour industry. Although Nakul sang few hit songs for films like Anniyan, Vettaiyadu Vilaiyadu, Vallavan, Ghajini etc. he could not fulfil his dream to become a lead actor.
Finally, lady luck smiled on the young actor and he is playing the lead in the big budget Kadhalil Vizhunthen. A few years has made a lot of changes in the appearance of Nakul. Now, the stout guy of Boys can compete with any hero of the industry with his new hairstyle and lean looks. Director Prasad has given him special training in dance, action, dialogue delivery, body language and mannerism to fit the role in the film.
Nakul has worked hard for playing the hero in Kadhalil Vizhunthen. According to reports, he has reduced his weight by more than 30 kilogrammes.
The heroine of the film, Sunaina, has already gained the attention of Telugu industries by playing the lead in a couple of Telugu movies. Nakul's 13 seconds kissing scene with heroine Sunaina publicly in the campus of Pondicherry University has already hit the media headlines.
Will the young hero Nakul, with a new look, achieve success in Kadhalil Vizhunthen with a debutante director and the mileage of a super song?
Posted by KK Moidu at 2:29 PM

Superb moview...acting of Nakul is fantabulous..........the new comer heroine Sunaina is a too good

i how are u nakul im sumitha,
i love so much da,
i miss so much da u very cute

wow wow Nakul you're soooooooo cute!
I luv you! and I'm a great fan of yours!

I saw Masilamani movie Trailer, It looks like Kadhalil Vizhunthen part two with same starring Nakul and Sunaina. This movie is yet to be another success for this loving pair, Check out this Masilamani Photo Video just to share with every one...