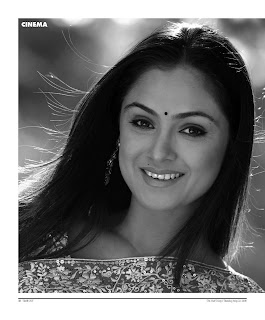 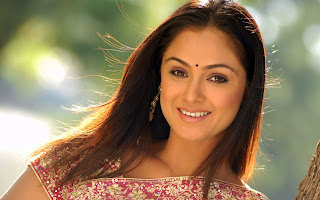 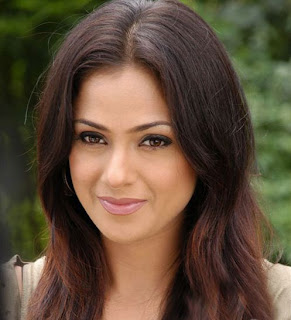 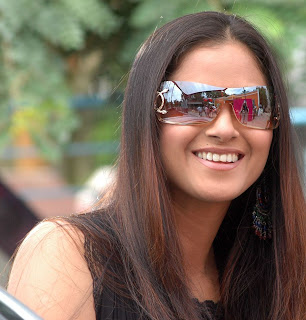 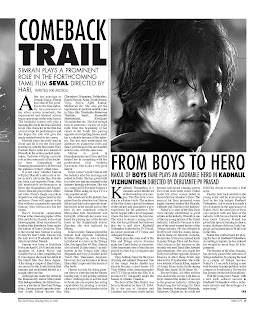 After her marriage to Deepak Bagga, Simran had almost bid good-bye to the film industry. As a precursor to her silver screen comeback, the experienced and talented actress began appearing on the mini screen. The beautiful actress will play a meaningful role in the Hari-directed Seval. Her character in the film has a lot of scope for performance and she hopes the role will give the much-needed boost to her career.
Bharath plays the male lead in Seval and he is for the first time teaming up with hit film maker Hari. Poonam Bajwa is the love interest of Bharath in the action-packed entertainer. Vadivelu will play a pivotal role as the room mate of the bachelor hero. Sampathraj and Shanmughasundaram will terrorise the audience in their villain roles.
It is not clear whether Simran will play Bharath's sister role or sister-in-law's role in the film. But she has been cast opposite Prem, who did memorable performances in films like Kannamma and Nepali, where Bharath played three different roles. Prem's tough cop role in Nepali was well appreciated by the audience. Prem will appear in the film without a moustache opposite Simran, who still has not lost her charm.
Hari's favourite cameraman Priyan is the cinematographer of the film and Rocky Rajesh is the stunt choreographer. Seval is produced by leading film distributor Jinna under the banner of Jinna Creations. This is the second time Simran is acting in director Hari's film. Simran was the lady love of Prashanth in Hari's directorial debut Tamizh.
Simran was born as Rishibala Naval on April 4, 1976 and she is the daughter of Ashok Naval and Saradha Naval. After completing her B.Com degree she made her debut in the Hindi film Tere Mere Sapne. After doing a couple of Hindi films, she moved to the South Indian film industry and established herself as a sought-after heroine.
Although she made her debut in the Mammootty starrer Malayalam film Indraprastham, she fetched success as a heroine in Tamil and Telugu films. Simran paired opposite front-line South Indian heroes like Chiranjeevi, Nagarjuna, Balakrishna, Kamal Hassan, Arjun, Sarath Kumar, Vijay, Surya, Ajith Kumar, Madhavan etc. She also got the opportunity to perform notable roles in films like Thulladha Manavum Thullum, Vaali, Kannathil Muthamittal, Kovilpatti Veeralakshmi etc. She had enough luck to perform a variety of roles right from the beginning of her career in the South. Her pairing opposite crowd pulling heroes made her a valuable heroine of the industry. She not only entertained the audience by glamorous roles and dance performances but also handled serious roles with the same ease.
Simran is good in Bharathanatyam and Salsa and that helped her in competing with her professional rival Jyothika Saravanan, who is also a very good dancer.
In her career's peak Simran left the industry after her marriage and settled in Delhi. She has given birth to a baby boy and she returned to the industry through television. Her role as a young girl in Pyramid Saimira's Simran Thirai airing on Jaya TV is a very popular serial.
Her comeback to the industry has gained media attention but Simran did not get lead roles opposite front-line heroes in her second arrival. Her hero in her comeback vehicle Malayalam film Heartbeats was Indrajith. Although her name was heard for playing one of the female leads in the Rajinikanth starrer Kuselan, she was replaced by Meena.
In her re-entry, Simran played the female lead opposite comedian Krishna Bhagavan, who is being introduced as a hero in the Telugu film Jon Appa Rao 40 Plus. Simran also played Balakrishna's grandmother in the Telugu film Okka Magaadu and Surya's mother in the Tamil film Vaaranam Aayiram. However, her performance in these films didn't captivated the hearts of film buffs.
Simran is ready for doing glamour roles as a heroine but the former leading lady is not getting suitable offers. Although she is not the lead in Seval, she can explore her acting capabilities by playing a serious character of different shades in the film.
Posted by KK Moidu at 2:31 PM