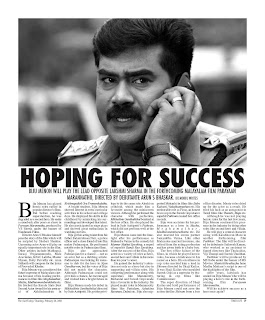 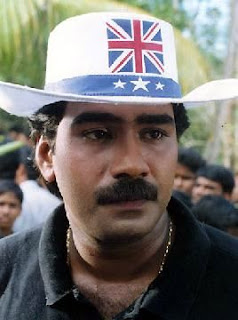 Biju Menon has played heroic roles earlier in popular director's films. But before reaching superstardom, he was degraded as a second hero. He seeks a comeback after years as a hero in Paryaan Marannathu, produced by VS Sheeja under the banner of Nandanam Films.
Director Arun S Bhaskar himself pens the story of the film which will be scripted by Shabari Shankar. Upcoming actor Arun will play an equally important role in the film. Other artistes include Madhupal, Suraaj Venjarammoodu, Mala Aravindan, KPAC Lalitha, Master Shyam, Baby Parvathy etc. Arun Sidharth will compose for the lyrics of Poovachal Khader.
Biju Menon was considered the future superstar of Malayalam cinema because of his leading performances in films like Meghamalhar, Mazha, Madhuranombarakkattu etc. He fetched the Kerala State Best Second Actor Award for his portrayal of Akhilachandran in Krishnagudiyil Oru Pranayakalathu.
A bright student, Biju Menon showed interest in extra curricular activities in his school and college days. He displayed his skills in his childhood by mimicking his surroundings and developed that talent. He also participated in stage plays and showed great enthusiasm in watching movies.
Biju got his acting talent from his father Balakrishnan Nair, a police officer and a close friend of late film maker Padmarajan. He performed notable roles in Padmarajan films.
Biju also approached Padmarajan for a chance — not as an actor but as a dubbing artiste. Padmarajan was looking for someone to dub for the hero in Njan Gandharvan, but the voice of Biju did not match the character. Although Padmarajan could not give him a chance, he encouraged and wished him a bright future in films.
Biju Menon made his debut in Mikhailinte Santhathikal directed by Jude Aattipetti. He got the privilege to do the same role Aloshi on celluloid, which made him a favourite among the miniscreen viewers. Although he performed the character with perfection, Mikhailinte Santhathikal bombed at the box office. He also played the lead in Jude Aattipetti's Puthran, which did not perform well at the box office.
Biju Menon came into the limelight after his performance as Mahendra Varma in the comedy hit Mannar Mathai Speaking, a sequel of superhit Ramji Rao Speaking. After the success of the film, Biju acted in a variety of roles as hero, second hero and villain in his more than ten year's career.
He gained the industry's attention not only as a hero but also in supporting and villain roles. His competing performance along with superstars like Mammootty, Mohanlal and Suresh Gopi made him a favourite in the industry. He played major roles in Mammootty films like Pattalam, Azhakiya Ravanan, Dubai etc. Biju also supported Mohanlal in films like Baba Kalyani, Vadakkumnathan etc. His memorable role as Firoz, an honest brave cop in the Suresh Gopi starrer superhit Pathram created box office records.
Biju won acclaims for his performance as a hero in Mazha, Meghamalhar, Madhuranombarakkattu etc. He also married his screen partner Samyuktha Varma. Like other Malayalee married heroines, she retired from the acting profession and has given birth to a baby boy.
The box office failure of the films, in which he played heroic roles, became a hindrance to his career as a hero. His excellence in cop roles merited him a lead in Shivam directed by Shaji Kailas. It was Shaji Kailas who moulded Suresh Gopi as a superstar by featuring in cop films like Commissioner.
The super direction of Shaji Kailas and bold performance of Biju Menon could not save the action thriller Shivam from a box office disaster. Meaty roles dried up for the actor as a result. He tried his luck as an antagonist in Tamil films like Thambi, Maja etc.
Although he was not playing heroic roles for the last few years, Biju Menon continued his presence in the industry by doing other roles like second hero and villain.
He will play a central character along with Kalabhavan Mani in another forthcoming film Pathikar. The film will be directed by debutante Satheesh Kumar, who worked as an assistant to famed directors like Thulasidas, Viji Thampi and Suresh Unnithan.
Pathikar will be produced by MS Babu under the banner of MS Movies. Manichithrathazhu fame Madhu Muttam's script is one of the highlights of the film.
After years, ladyluck has smiled on Biju Menon who will be playing a hero's role in the forthcoming film Parayaan Marannathu.
Will he achieve success as a hero once again?
Posted by KK Moidu at 9:50 PM