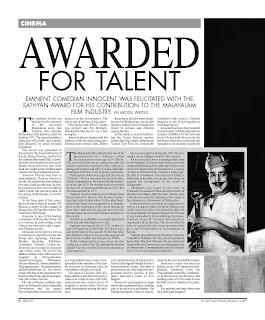 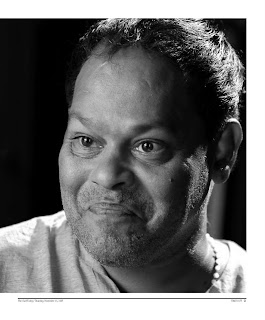 Eminent comedian Innocent was felicitated with the Sathyan Award for his contribution to the Malayalam film industry. KK Moidu writes

The Sathyan Award was initiated in the memory of the renowned Malayalam actor, late Sathyan, who ruled the Malayalam film industry until his death in 1971. The award includes a cash price of Rs10,001 and a medallion designed by artist Aryanad Rajendran.
The award was presented to Innocent by the Forest Minister of Kerala, Binoy Viswam, on Nov.9 at the Sathyan Memorial Hall. A three-member jury headed by director K Madhu chose Innocent, one of the most successful actors of Malayalam cinema, for the prestigious award.
Innocent Vincent was born in Irinjalakkuda, Thrissur district in Kerala. He entered the film industry two-and-a-half decades ago. At first, he produced a few serious offbeat films, but he was not successful. In the acting field though, he hit the jackpot.
In the long span of his career, Innocent has worked in around 500 films in a variety of roles, mainly in Malayalam. He has also done a few Tamil and Hindi films.
Innocent is one of the leading comedians of Malayalam films. He is a veteran in performing comic roles in his own style with a signature Thrissur accent.
He shone on the silver screen as a comedian in superhit movies like Ramji Rao Speaking, Maannar Mathai Speaking, Kilukkam, Godfather, Vietnam Colony etc. Innocent also excelled in character and villain roles. He proved his skills in serious roles with a touch of laughter in Kabooliwaala, Gajakesariyogam, Mithunam, Mazhavilkavadi, Manassinakkare, Thuruppugulan, Rasathanthram, Mahasamudhram etc. His effort, along with that of the superstars who starred in the films, played an important role in their success.
His role as Warrier (a Hindu caste man) in Mohanlal-starrer superhits Devasuram and its sequel Raavanaprabhu was noticed for its nuances in the performance. The role is one of the best in his career.
His pairing with KPAC Lalitha was perfect and Pai Brothers, Manichithrathazhu etc are a few examples.
Innocent always laughs with the audience with his outstanding performances in comedy roles. Either as a responsible house owner or irresponsible elder member of the family and even in villainish roles, he contributes with his own style.
His typical Thrissur-style dialogue delivery and hilarious performances in comical roles with witty mannerisms has created waves of laughter in movie halls. That has made him popular among the audience.
Innocent is also the most imitated actor of Malayalam cinema and mimicry artistes have brought him closer to women and children among his fans.
At the mimicry events held during the Onam festival season, artistes like Raja Saheb, Kalabhavan Yousuf, Tiny Tom, etc. imitate the voice and behaviour of Innocent for Maveli (the legend behind Kerala's harvest festival Onam). This kind of performance not only helps the programme achieve success, it also takes Innocent's fame to new heights.
Innocent's participation in stage shows also guarantees him a leading role as an anchor or performer. His Kathaprasangam (a kind of oratory, combined with poetry) Olayaal Menjoru is one of the regulars in Gulf stage shows.
Innocent has been the president of Association of Malayalam Movie Artistes (AMMA) for the last nine years. He has held the post for the last three consecutive terms and has managed to successfully handle the issues in his own inimitable manner.
Innocent's name was heard in politics as an LDF-supported independent candidate from the Irinjalakkuda assembly constituency in the last Kerala elections. But nothing came of it. He made it clear he didn't have a mindset of a politician.
It is perhaps one time when even the politicians laughed!

The Malayalam film industry lost one of its glorious actors ever — Sathyan — when he passed away at the age of 59. But he still lives in the hearts of cinegoers with his superior and male symbolic roles. Sathyan's strong performance and style of acting made him stand apart from the crowd of heroes of his time.
Sathyanesan Nadar was popularly known as "Sathyan." He is a two-time Kerala State Film Award winning actor. He entered the film industry at the age of 39. He won the best actor award for his role in Kumarasambavam in 1961 and Karakaanakadal in 1971.
Sathyan was the leading star of Malayalam films in the 60's. He was well-known for playing ideal male symbol roles. On the other hand, actor Prem Nazir was recognised as a romantic hero in the beginning of his career though he later drew attention by playing movies with themes based on social and religious injustice in the society.
Another actor, Madhu, was usually picturised as the sad and suffering lover's role.
Sathyan was born in Nov.9, 1911, in the village of Nagercoil, Tamil Nadu. The place was a part of the State of Travancore. Before his entry into filmdom, Sathyan was a teacher and served the army as a soldier and took part in WWII.
Before taking up his acting career, he also worked as a clerk at the Trivandrum Secretariat and the Travancore State Police Department as a sub inspector.
He was an inspector during the 1947-48 communist riot in Alleppey North Police Station.
As an actor, his career's turning point came in Neelakkuyil. It was the first National Award winning Malayalam film. Although Sathyan has delivered memorable performance in a variety of roles in different films, Sathyan's most popular film is Chemmeen. His character Pazhani, a fisherman in the film, was an epic love story set against the background of the coast of Aalappuzha.
Chemmeen was based on the story of Thakazhi Sivasankara Pillai and the heroine of the film was Sheela. After the film, Sheela came to be known as the Karuthamma (the name of her character in Chemmeen) of Malayalees.
Sathyan had his own style of acting and his role as a rickshaw puller in Odayil Ninnu is one of the best in his career. He played the title role in Kayamkulam Kochunni released in 1966 and it was noticeable by his excellent performance. Playback singer KJ Yesudas also played an important role in the film. The movie tells the story of a good thief, who was a favourite of the poor and downtrodden in Kayamkulam in Kerala.
Sathyan played historical characters based on Vadakkan Pattukal. He has played legendary heroes like Thacholi Othenan. He also delivered memorable performances in revolutionary roles in Ningalenne Communistakki based on Thoppil Basi's novel and Inquilaab Zindabad.
Posted by KK Moidu at 7:21 PM