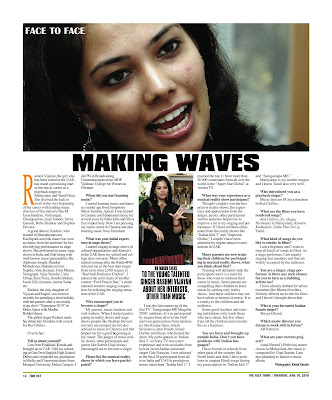 Rashmi Vijayan, the girl who has been raised in the UAE, has made a promising start in her music career as a playback singer in Malayalam and Tamil films. She also had the luck to work in the very beginning of her career with leading music directors of the industry like M Jayachandran, Vidyasagar, Ouseppachan, Gopi Sunder, Selva Ganesh, Babu Shankar and Stephen Devassi. 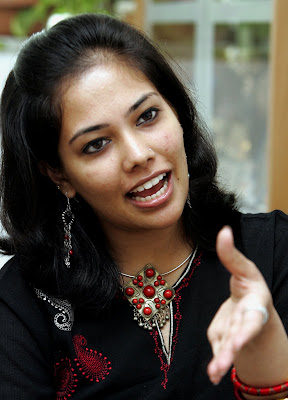 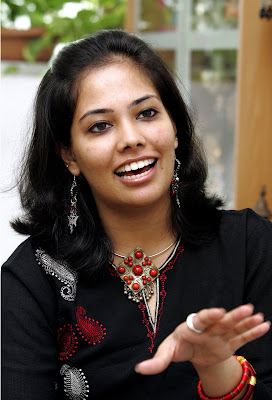 Rashmi, the only daughter of Vijayan and Ragini, was in town recently for spending a short holiday with her parents after a successful stage show “Sopaanam 2010” in Doha, Qatar with Madhu Balakrishnan. 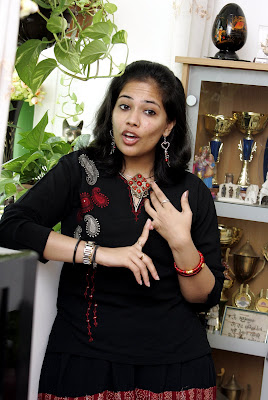 The gifted singer Rashmi made her debut into filmdom with a track for Red Chillies. 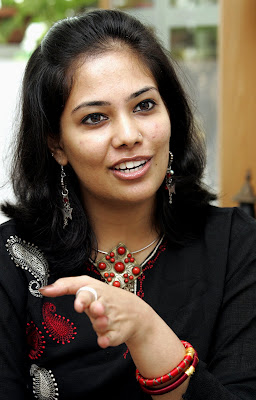 Over to her;-
Tell us about yourself?
I am from Palakkad, Kerala and brought up in UAE. I did my schooling at Our Own English High School, Dubai and completed my graduation in Media and Communications from Manipal University, Dubai Campus. I did PG in Broadcasting Communications from MOP Vaishnav College for Women in Chennai.
When did you start learning music?
I started learning music and dance at a tender age from Symphony Music Institute, Ajman. I was trained in Carnatic and Hindustani music for several years by Babu John and Shiva Iyer respectively. Now I am pursuing my music career in Chennai and also learning music from Tanushree.
What was your initial experience in stage shows?
I started singing in stage shows of cultural organisations and Alumni’s in the UAE from my school and college days onwards. More offers started coming after the Radio4FM selected me as the best duet singer from more than 2,500 singers in “Reefmall Radiostar Contest”. I entered the semi finals of another contest “Ford Fusion Star,” a multi national western singing competition for selecting the singing sensation of the UAE.
Who encouraged you to become a singer?
My parents, music teachers and well wishers. When I started participating in reality shows and stage shows people like Stephan Devassi not only encouraged me but also advised to move to Chennai and that helped me for a good beginning in my career. The judges of music reality shows, other participants and guests like Suresh Gopi always encouraged me to become a singer.
Please list the musical reality shows in which you have participated?
I was the first runner up of the Zee TV “Saregamapa ME Muqabla 2006” auditions. It was participated by singers from all over the Gulf and won appreciation from luminaries like Kumar Sanu, Adesh Srivastava, Jatin Pundit, Ismail Darbar and Shaan, who hosted the show. My participation in “Indian Idol 3” on Sony TV was a new experience and won accolades from lyricist Javed Akthar and noted singer Udit Narayan. I was selected in the final 28 participants from all over India and UAE in prestigious music talent hunt “Indian Idol 3.” I reached the top 11 from more than 20,000 contestants from all over the world in the “Super Star Global” at Amrita TV.
What was your experience as a musical reality show participant?
Though I couldn’t win the first prize in reality shows, the experience and appreciation from the judges, guests, other participants and the audience helped me to improve a lot in my singing and performance. If I have not been eliminated from the reality shows like “Indian Idol 3” and “Superstar Global,” I couldn’t have been attended my degree annual examinations in UAE.
Many parents are now training their children for participating in musical reality shows, what you think about that?
Training will definitely help the participants and it is a must for those who want to continue their career in music. Some parents are compelling their children to learn music by aiming only reality shows. And these children may not have talent or interest in music. It is a cruelty to the children and the audience.
Some good teachers and training institutions only teach those who have talent, but few others train all the children and consider this as a business.
You are born and brought up outside India. Don’t you have problems with Indian languages?
I have friends in schools from other parts of the country like North India and didn’t have problems in singing Hindi songs during my participation in ”Indian Idol 3” and “Saregamapa ME.”
Malayalam is my mother tongue and I know Tamil also very well.
Who introduced you as a playback singer?
Music director M Jayachandran in Red Chillies.
What are the films you have rendered songs?
Red Chillies, IG, Happy Husbands in Malayalam, Kanden Kadhalein, Siddu Plus Two in Tamil.
What kind of songs do you like to render in films?
I am a beginner and I want to sing all kinds of songs in films. As a stage performer, I am mainly singing fast numbers and that are widely accepted by the audience.
You are a singer, stage performer. Is there any such chance for you to turn as a dubbing artiste too?
I have already dubbed for advertisements like Bhima Jewellers. Nobody offered me to dub for films and I haven’t thought about that.
Who is your favourite Indian female singer?
Shreya Ghosal.
Which music director you dream to work with in future?
AR Rahman.
What are your current projects?
Amal Neerad’s Prithviraj starrer Anwar in Malayalam, the music is composed by Gopi Sundar. I am also planning to launch a music album.
Photographs: Kamal Kassim
Posted by KK Moidu at 7:56 PM