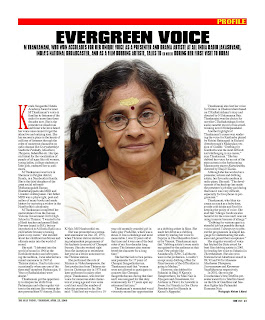 M Thankamani, who won accolades for her unique voice as a presenter and drama artiste at All India Radio (Akashvani), India’s national broadcaster, and as a film dubbing artiste, talks to KK Moidu during her first visit to Dubai 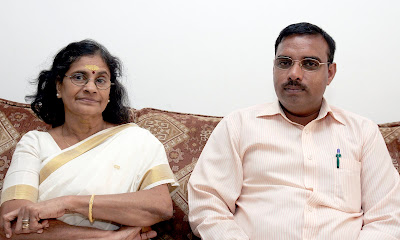 Kerala Sangeetha Nataka Academy Award winner M Thankamani’s voice is familiar to listeners of the radio for more than three decades now. She is the presenter at Akashvani and those who have heard her voice once cannot forget the attractive and enticing tone. She has secured a place in the hearts of millions of listeners through the roles of numerous characters on radio dramas like Sooryakanthiye Snehicha Penkutty, Moodhevi, Theyyam, Indulekha etc. Her special talent for the vocalisation of people of all ages like old women, young ladies, college students or little girls, endeared her to audiences.M Thankamani was born in Shoranur in Palghat district, Kerala, in a Namboothiri family. She is the third daughter of the great social reformer Mullamangalath Raman Bhattathirippadu aka MRB and Umadevi Antharjanam. Her father MRB was a playwright, poet and author of many books and made history by marrying a widow in the Namboothiri community. 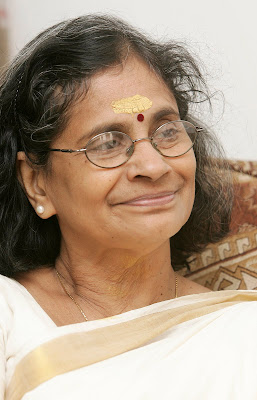 M Thankamani completed her matriculation from the famous Victoria Government Girl’s High School in Thrissur. “I wanted to be a Hindi teacher and passed Hindi Praveen (equal to BA), but my introduction to All India Radio as a child artiste became a turning point in my career,” she recalled about her childhood ambitions and ultimate entry into the world of sound.She said: “I debuted into the world of sound in 1964 at the Kozhikode station and after passing the audition, I was selected as a casual announcer in 1967 at Thrissur station. I had to take over occasionally when any one of the three staff members Padmarajan, S Venu or Radhalakshmi were absent.”

Thankamani got the opportunity to sharpen her skills from Padmarajan and other regular visitors to the stations like veteran theatre personalities PJ Antony, Balan K Nair, MS Namboothiri etc.
She was promoted as a permanent announcer on Dec. 23, 1973, when Thrissur station started airing independent programmes of the kacheris (concerts) of Chempai Swamy. She also worked right from the inception to retirement last year as a senior announcer at the Thrissur station.She performed the role of Mariam in Vishachumpanam, the first production from Thrissur station on Christmas day in 1973 and later performed in many other plays. Thankamani, who lent her voice for numerous elder characters at young age and vice versa could not recall the number of roles she portrayed so far. She said: “I had lent my voice for a 10-year-old mentally retarded girl in radio play Prahelika, which was a strain. It was a challenge and most memorable. I was 22 years old at that time and it was one of the best roles of my four-decades long career. The listeners also remembered the character for a long time.” 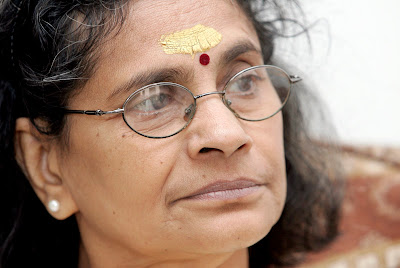 She had the luck to be a permanent presenter for 17 years of Chempai Sangeetholsavam. Thankamani said that “women were not allowed to participate in concerts like Chempai Sangeetholsavam during that time and I was assigned for that duty continuously for 17 years upto my retirement last year.” Thankamani’s unmatched vocal virtuosity earned her opportunities as a dubbing artiste in films. She made her debut as a dubbing artiste by lending her voice to Supriya in Theerthayathra directed by Vincent. Thankamani says that “dubbing artiste's were rarely recognised by the audience at that time. Few people like Anandavally, KPAC Lalitha etc. were in the profession. I couldn’t accept many dubbing offers for films because of the difficulties in going to Madras.”However, she dubbed for Suhasini in Shaji N Karun’s Vanaprastham, for Mini Nair in Niyogam and Desadanam, for Archana in Piravi, for Aswathi in Swam, for Nirmala in Oru Cheru Punchiri and for Sharada in Kamal’s Rappakal.Thankamani also lent her voice for Sridevi in Thulavarsham based on C Radhakrishnan’s story and directed by N Sukumaran Nair. Thankamani was the choice for novelist C Radhakrishnan for the audio cassette record of his award-winning novel Nizhalpaadukal. Another highlight of Thankamani’s career was rendering the voice for Kasthurba played by Rohini Hattangadi in Richard Attenborough’s Malayalam version of Gandhi. “Dubbing for Kasthurba was the most difficult and challenging in my career,” says Thankamani.” She has dubbed her voice for an out of the state actress in the forthcoming Mammootty starrer Kuttyshranku directed by Shaji N Karun.Although she has worked as a presenter, actress and dubbing artiste, her favourite medium is radio plays. She said: “The development of technology has made the presenter’s job easy and during that time it was very difficult, especially for live phone-in programmes.”Thankamani, who likes ice cream as much as a baby does, avoids cold drinks and food for keeping the purity of voice. She said that “allergic foods are also harmful for the voice and I was not using tamarind because of allergy.”“Dubbing for various ages is a stressful job but possible through voice control. I always try to present the programmes in simple language for understanding the audience and gained their acceptance.” 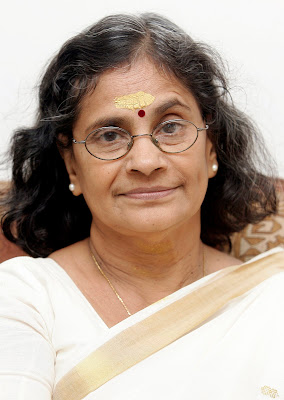 Her singular warmth of voice has fetched the State award for best film dubbing artiste in 2001 for lending her voice to Suhasini in Theerthdanam. She also won National level Akashvani award in 89, 92 and 94 for Mounam Meettunna Thampuru, Sooryayanam and Karmanye Vaadhikarasya respectively.In 2001, she won the Doordarshan’s best Telefilm presenter award for a Telefilm based on the life of Gandhian and freedom fighter late Padmashri Kumaran Nair.
Photograph: Nisham A Manaf
Posted by KK Moidu at 7:42 PM

Very proud to read on the accomplishments of Thankamani (Mani) who we know for over 40 years.