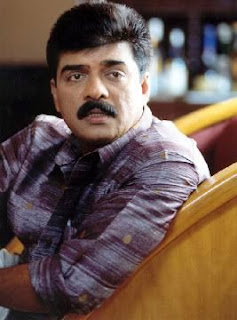 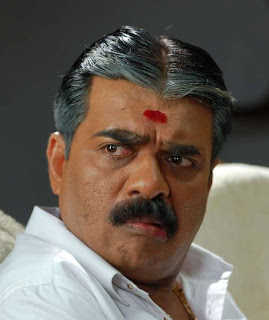 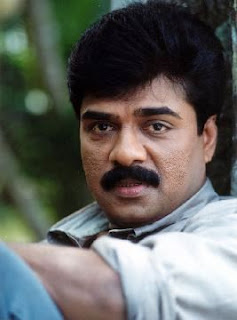 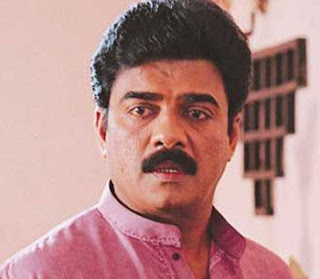 Vijayaraghavan plays a soulful character after five years in Innathe Chinthavishayam directed by Sathyan Anthikad, writes KK Moidu.
Vijayaraghavan was always defeated by the screen heroes for the last couple of years. His encounters against the hero with red eyes and brusque dialogues were always welcomed by the audience. But the faiure of a villain is inevitable for the climax of the film.
However, after a long wait of five years, Vijayaraghavan grace the screen with an important role in forthcoming film Innathe Chinthavishayam. His character name in the film is Pitambaram and he is a gulf returnee. His crucial role in the film has ample scope for humour. Former heroine Mohini plays the wife role of Vijayaraghavan.
Vijayaraghavan, the son of veteran theatre personality NN Pillai made his film debut in Kaapalika. The film released in 1973 was based on his father's play of the same title. Although he played a full length role in Surumayitta Kannukal, he came into limelight after playing the role of Ananthan in Mammootty starrer New Delhi.
His role as Ramji Rao in superhit Ramji Rao Speaking directed by Siddque Lal and its sequel Maannaar Mathai Speaking made him noticeable in the industry. He excelled in cop's role in Naaduvazhikal, Commissioner, Mayilattam, CID Moosa etc. He also proved his mettle as an actor in offbeat films like Desadanam, Danny, Mankamma, Neythukaran, Naalu Pennungal etc.
Vijayaraghavan runs his father's theatre and has directed many stage plays. His directorial experience in stage plays helped him a lot in his acting career to understand and study the characters. His father NN Pillai also acted in few films like Godfather and Pingaami. Pillai's immortal role as Anjooran in Godfather is the most favourite for Mimicry artistes and their imitation of the legendary personality made him favourite among the young generation.
Vijayaraghavan played hero, second hero and character roles was typecasted in venomous villain roles for the last couple of years. His villain roles in last year released Mammootty starrer Mayavi, Nasrani and recently released Raudram were noticed by his performance. The gulf returnee role in Sathyan film will be a release for the actor from the regular villain roles. Will he breaks his typecast image with Sathyan's Innathe Chinthavishayam?
Posted by KK Moidu at 4:45 PM