MALAYALAM CINEMA: THE HITS AND MISSES OF SUPERSTARS 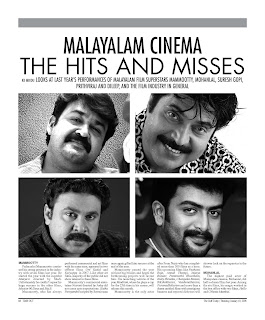 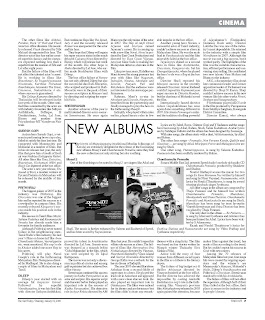 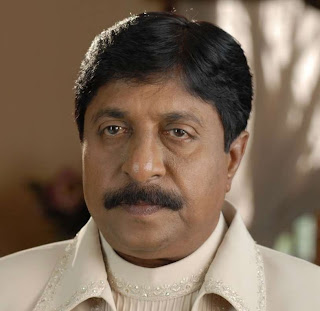 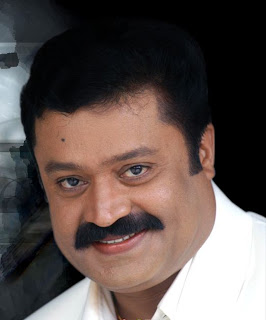 Malayalam cinema: The hits and misses

Mammootty
Padmashri Mammootty continued his strong presence in the industry with seven films last year. He started the year with the superhit Maayavi directed by Shafi. Unfortunately he couldn't repeat his huge success in the other films, Mission 90 Days and Big B.
Mammootty, who has always performed commercial and art films with the same ease, appeared in two offbeat films Ore Kadal and Kaiyoppu in 2007. Like other art films, majority of the public did not show interest to these films.
Mammootty's commercial entertainer Nasrani directed by Joshy did not come upto expectations. Katha Parayumbol scripted by Sreenivasan once again gifted him success at the end of the year.
Mammootty passed the year without big bruises and hopes the forthcoming projects will favour him. His launching vehicle of the year Raudram, where he plays a cop for the 25th time in his career, will release this month.
Mammootty is the only actor after Prem Nazir who has completed more than 300 films as a hero. His upcoming films like Pazhassi Raja, Annan Thampi, Maaya Bazaar, Pattanathil Bhootham, Kutty Shranku, Chempaka Raman, Rikshakkaran, Vandematharam, Paramadhikaram and more than a dozen untitled films with prestigious banners and reputed directors will shower luck on the superstar in the future.

Mohanlal
The highest paid actor of Malayalam cinema, Mohanlal, did half-a-dozen films last year. Among the six films, his magic worked in the box office with two films, Hallo and Chhotta Mumbai.
The other films like Alibhai, Pardesi, Rock 'N' Roll and Flash were box office disasters. His recently released Flash directed by Sibi Malayil disappointed his fans. The director-actor duo has earlier created superhit classics and the cinegoers expected nothing less than a superhit from the reunion of Sibi and Lal after eight years.
But the failure of the films will not affect the talented actor's career. He is working in films like Bheeshmar, Ee Irupathiyonnaam Noottandu, Karthika Thirunaal Kaarthikeyan, Alexander The Great, Casanova, Nadodikkattu 4 etc. where success is guaranteed.
His College Kumaran directed by Thulasidas will be released in the last week of the month. Other untitled films committed by the actor are with industry favourites like Sathyan Anthikkadu, Sidhique, B Unnikrishnan, Joshy, Lal Jose, Blessy and another from Priyadarshan-MT Vasudevan Nair team.
Suresh Gopi
Action hero Suresh Gopi, a veteran in performing brave cop roles, failed to satisfy his fans last year. He competed with Mammootty and Mohanlal in a number of films. But in his six releases last year, the only film that gave him a breath of fresh air was Nadhiya Kollappetta Rathri. All other films like Time, Detective, Bharathan, Kichamani MBA and Black Cat shattered at the box office.
The actor's new year release, The Sound of Boot, a maiden venture of Pyramid Saimira will be released by the middle of this month.
Prithviraj
The biggest gainer of 2007 in the industry was Prithviraj. His Chocolate was one of the biggest hits and he repeated his success as a crowdpuller in campus films. His recently released Kangaroo's success made his position safe in the industry.
His success in Tamil films Mozhi, Satham Podathey and Kannamoochi Yenada has already made him a favourite for family audiences.
Although Prithviraj never tasted failure in the neighbouring state, Tamil Nadu's film industry, his last year's films on home turf like Avan Chandiyude Makan, Veeralippattu etc. went unnoticed. His cop's role in Khakee added one more flop to his career.
Prithviraj will play Naxal Joseph's role in the forthcoming Malayalam film Thalappavu directed by Madhupal. He is also doing a couple of films in Malayalam and Tamil.
Dileep
Dileep's year started with an average hit Inspector Garud. Followed by superhit Vinodhayathra, it was his first film with director Sathyan Anthikkad. But continuous flops like The Speed, July 4 and the recently released Romeo was unexpected for the actor and his fans.
They hope that Dileep will regain his super success status in the much delayed Calcutta News directed by Blessy, which will release last week of the month. His other hope is Mulla directed by Lal Jose, who earlier made blockbuster films with Dileep.
The box office failure of Romeo has not only affected Dileep but also the successful duo Rafi-Mecartin, who scripted and produced it. Rafi-Mecartin were in the peak of their success as scriptors in Maayavi and by directing and scripting the superhit Hallo.
Sreenivasan
Another achiever of the year is multi talented director-actor-scenarist Sreenivasan. He once again proved his talent in Arabikkatha directed by Lal Jose. Sreenivasan was featured as a staunch leftist 'Cuba Mukundan' in the film, which was well scripted by Dr Iqbal Kuttipuram.
The movie was not only a discussion in political circles and among gulf expatriates but also achieved box office victory.
Sreenivasan continued his success journey in Kadha Parayumbol as an actor and scriptor. His superior script and character barber Balan played an important role in the success of Kadha Parayumbol. His detective role in Ayur Rekha directed by AM Manu was the only minus of the actor in 2007.
The flop of Anjil Oraal Arjunan and Sooryan ruined Jayaram's career. He is coming up with a new film Novel. Novel is produced by East Coast Productions and directed by East Coast Vijayan. Anniyan fame Sada is making her Malayalam debut as a heroine in the film.

Like previous years, Kalabhavan Mani showed his strong presence last year with films like Nagaram, Indrajith, Nanma, Abraham and Lincoln, Paayum Puli and Rakshakan. But the audience were not interested in his stereotype performances.
Rahman, Mani's co-star in Abraham and Lincoln, Nanma etc. benefited from the partnership and finally managed to play the hero in the forthcoming Musafir.
Indrajith, who played villain roles earlier, played heroic roles in few films last year. He couldn't repeat his villain role success as a hero. The failure of films like Hareendran Oru Nishkalangan directed by Vinayan, Heartbeats directed by Vinoo Anand and Soorya Kireedam directed by George Kithu was a setback for the heroic dream of Indrajith.
The year 2007 elevated Harishree Ashokan from a second fiddle of superstars to a hero. He played the lead role in Aakasham and appeared with a new clean shaven look. He also played an important role in Ottakkayyan. The films were noticed for its theme and performance but the films didn't create any remarkable impulse in the box office.
Another young hero Narien, a successful actor of Tamil industry, couldn't achieve success as a hero in Malayalam films. He was the male lead in Panthayakozhi and the film miserably failed at the box office.
Jayasoorya shined as a second hero in films like Arabikkatha, Chocolate, Kangaroo etc. but his Changathipoocha, where he played the hero's role was a flop at the box office.
Director Shafi repeated his Maayavi success in the recently released Chocolate. Anwar Rasheed couldn't repeat his Rajamanikyam super success in Chhotta Mumbai, but the charisma of Mohanlal saved the film.
Internationally famed director Adoor Gopalakrishnan has once again done something different in 2007. His Naalu Pennungal continued the tradition of telling powerful themes with a simplicity. The film was based on four stories written by Njanpit winner Thakazhy Siva Sankara Pillai.
Adoor told the story of four women from different social layers in the film as a tribute to the literary doyen.
The failure of big budget sci-fi thriller Athisayan directed by Vinayan bombed at the box office. But the director has achieved the impossible by casting Amitabh Bachchan in a cop's role in the forthcoming film. Vinayan's previous film Albhuthadweep released in 2005 again gained the attention, because of Ajayakumar's (Undapakru) Guinness Book entry.
Director Lohitha Das was one of the industry's most dependable. He returned to the industry with a simple film Nivedhyam in 2007. Although the movie was not a big success, but it worked partly. The highlights of the film was the suitable characterisation, efficient performances and convincing story telling. He contributed two new talents Vinu Mohan and Bhama to the industry.
AKG, a documentary film about late communist leader and former opposition leader of Parliament was directed by Shaji N Karun. Shaji couldn't achieve success in his new venture like his other works Piravi, Swaham and Vanaprastham.
P Sreekumar played AKG's role in the film produced by Purogamana Kala Sahithya Sangham, Kasargode District Committee.
Director Kamal, who always makes films against the trend, has made a film according to the trend. But he couldn't repeat his success in Goal with newcomers.
Among the 70 releases of Malayalam films last year, four mega hits were created by reigning superstars and the winner's are Mammootty's Maayavi, Mohanlal's Hallo, Dileep's Vinodhayathra and Prithviraj's Chocolate. Sreenivasan stands next with his Arabikkatha.
The failure of films will not affect the superstars. Although half of their films failed at the box office, their place is secure in the industry and in people's hearts.

The lovers of Mappilappattu (traditional Muslim folksongs of Kerala) are extremely delighted at the release of the fascinating new albums Musaf 2 and Chanthamulla Pennalle, since they find the new collection not only stirring but also soothing

Musaf 2
One of the first things to be noted in Musaf 2 are singers like Afsal and Shafi. The music is further enhanced by Saleem and Rasheed of Speed, and has been scored by Sayan Anwar.
Lyrics are by Jaleel, Bawa, Chittoor Gopi and Y Sudamsu and the songs have been sung by Afsal, Rahna, Shafi, Salim Kodathoor. Arabic lyrics are by Siddique Fathahi and the album has been designed by Sasisarga.
With nine songs, the album starts with a duet, Vellikolusaninju, by Afsal and Rahna.
The other four songs - Poomulle, Nee Porumo Koode, Qalbile and Kinavinte — are sung by Afsal. Misrippon Poove and Mullappoovinte are sung by Shafi.
One other song, Thamarappoove, is sung by Saleem Kodathur. Panineerin has been soulfully rendered by Rahna.