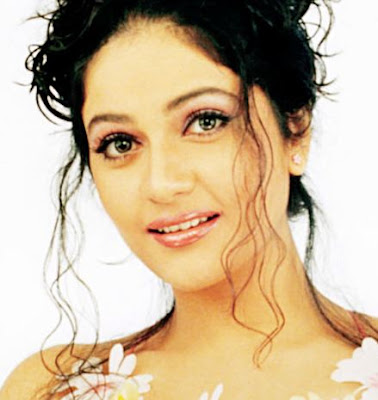 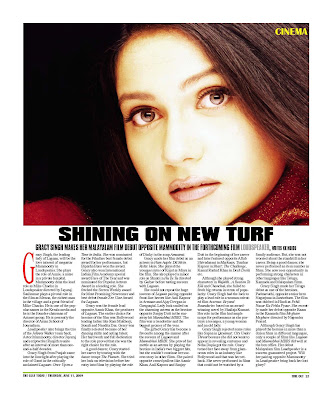 Gracy Singh makes her Malayalam film debut opposite Mammootty in the forthcoming film Loudspeaker, writes KK Moidu
Gracy Singh, the leading lady of Lagaan, will be the love interest of megastar Mammootty in Loudspeaker. She plays the role of Annie, a nurse in a private hospital. Mammootty dons the lead role as Mike Chacko in Loudspeaker directed by Jayaraj. Sasikumar plays a pivotal role in the film as Menon, the richest man in the village and a great friend of Mike Chacko. He is one of the popular names in the Kerala media and he is the founder-chairman of Asianet group. He is presently the director of Asian School of Journalism.
Loudspeaker also brings the trio of the Johnny Walker team back. Actor Mammootty, director Jayaraj and scriptwriter Ranjith reunite after an interval of more than one-and-a-half decades.
Gracy Singh from Punjab came into the limelight after playing the role of Gauri in the critically acclaimed Lagaan: Once Upon a Time in India. She was nominated for the Filmfare best female debut award for her performance, but Bipasha Basu won the award. Gracy also won International Indian Film Academy special award Face of The Year and was nominated for Popular Actress Award in a leading role. She fetched the Screen Weekly award for Most Promising Newcomer and best debut female Zee Cine Award for Lagaan.
Gracy was the female lead opposite Aamir Khan, the producer of Lagaan. The earlier choice for heroine of the film was Bollywood leading ladies like Rani Mukherji, Sonali and Nandita Das. Gracy was finally selected because of her dancing skills and acting talent. Her hard work and full dedication to the role proved that she was the right choice for the role.
A good dancer, Gracy started her career by touring with the dance troupe The Planets. She tried her luck on television before her entry into films by playing the role of Dinky in the soap Amaanat.
Gracy made her film debut as an actress in Hum Aapke Dil Mein Rehte Hain. She played the younger sister of Kajol as Maya in the film. She also played a minor role as Shanti in Hu Tu Tu directed by Gulzar before tasting success with Lagaan.
She could not repeat the huge success of Lagaan pairing opposite front-line heroes like Anil Kapoor in Armaan and Ajay Devgan in Gangaajal. Lady luck smiled on the charming actress as the heroine opposite Sanjay Dutt in the runaway hit Munnabhai MBBS. The film was a trendsetter and the biggest grosser of the year.
The gifted Gracy has become a favourite among the masses after the success of Lagaan and Munnabhai MBBS. She proved her mettle as an actress by playing the heroine in India's two biggest hits, but she couldn't continue her success story in other films. She paired opposite crowd pullers like Aamir Khan, Anil Kapoor and Sanjay Dutt in the beginning of her career and later featured opposite Aftab Shivadasani in Muskaan, Tusshar Kapoor in Shart: The Challenge, Kamal Rashid Khan in Desh Drohi etc.
Although she played strong characters in Wajahh...A Reason To Kill and Chanchal, she failed to fetch big returns in terms of popularity. Gracy Singh had the luck to play a lead role in a woman-oriented film Aseema: Beyond Boundaries based on an award-winning novel by Shailaja Kumari. Her role in the film had ample scope for performance as she portrays a teenager, a young woman and an old lady.
Gracy Singh rejected some roles like Sapna in Qayamat: City Under Threat because she did not want to appear in revealing costumes and Neha Dupia got the role. Gracy turned her face away from glamorous roles in an industry like Bollywood and that was her setback. She never performed in films that could not be watched by a family audience. But, she was not worried about the standstill in her career. Being a good dancer, she never performed an item number in films. She now sees opportunity in performing strong characters in other languages like Telugu, Kannada and Malayalam films.
Gracy Singh made her Telugu debut as one of the heroines, Padmavathi, opposite senior hero Nagarjuna in Santosham. The film was dubbed in Hindi as Pehli Nazar Ka Pehla Pyaar. She recently made her debut opposite Raam in the Kannada film Meghave Meghave directed by Nagendra Prasad.
Although Gracy Singh has played the heroine in more than a dozen films in different languages, only a couple of films like Lagaan and Munnabhai MBBS did well at the box office. Her debut Malayalam film Loudspeaker is a success-guaranteed project. Will her pairing opposite Mammootty in Loudspeaker bring back her lost glory?
Posted by KK Moidu at 9:12 PM