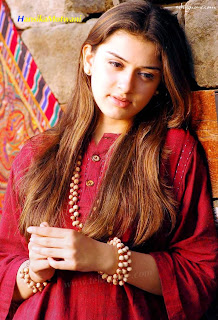 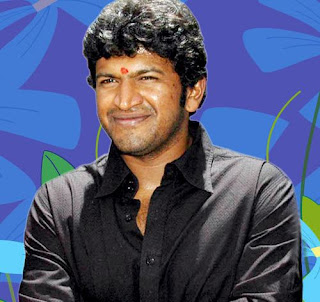 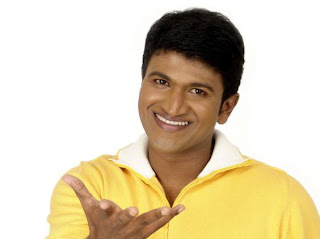 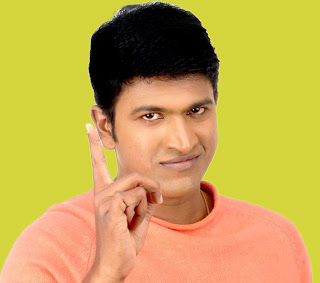 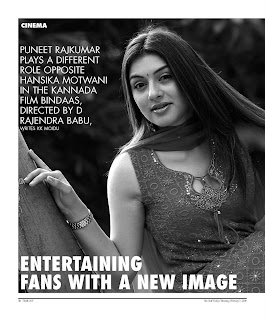 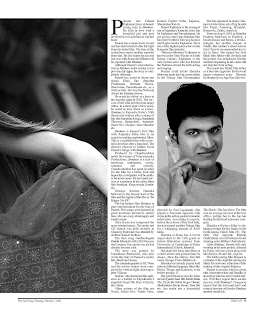 Entertaining fans with a new image

Popular star Puneet Rajkumar plays an honest young man in Bindaas. He falls in love with a beautiful girl and gets involved in evil activities to win her heart.
Puneet has a clean track record and has delivered hit after hit right from his debut film. The fans of the action hero expect another superhit from him. He also hopes his success last year with Arasu and Milana will be repeated with Bindaas.
Although Puneet's characterisation in Bindaas looks similar to his previous hit Appu, the story is completely different.
Puneet has acted in about one dozen films like Bhaktha Prahlaada, Bettada Hoovu, Yaarivanu, Parashuram etc. as a child artiste. He won the National Award for Bettada Hoovu.
He made his debut as a hero in the superhit Appu in 2002. The success of the film merited him many offers. In a short span of five years, he acted in nine films as a hero. Bindaas is Rajendra Babu's 50th directorial venture after a string of hits like Karulina Koogu, Haalunda Thavaru, Ramachari, Annaiah, Yaare Nee Cheluve, Auto Shankar etc.
Bindaas is Puneet's first film with Rajendra Babu who is an expert in making sentimental films. This is a youthful film with a powerful storyline after a long time. The director expects to further boost Puneet's image with Bindaas.
Produced by Chandrasekhar under the banner of Udayachandra Productions, Bindaas is a mix of emotions, sentiments, action, romance and comedy. Chandrashekhar has spent lavishly for the film for a better look and hopes the crowdpuller will be another hit in his career. He has tasted success as a producer in his earlier films like Annaiah, Karpoorada Gombe etc.
Teenage heroine Hansika Motwani is the female lead of the film and the tagline of the film is 'Be Happy. No BP'.
The big budget film Bindaas is pure entertainment for the fans of Puneet. Few songs were pictured in good locations abroad to satisfy fans, who are crazy about peppy and trendy music.
Guru Kiran has composed the mass oriented music. The audio and CD launch was held recently in Chancery Hotel and was attended by all three Kumar brothers.
The duet song Gubbachigalu Kaddu Muchchi with Udit Narayan and Soumya Rao on the vocals has already become a hit.
The story was penned by Janardhana Maharishi, who also wrote the story of Puneet's earlier hits Akash and Arasu.
The cinematographer is HC Venu and the action scenes were composed by veteran fight choreographer Vijayan.
Suman, who terrorised the audience as a baddie in Rajinikanth's superhit Sivaji The Boss will play the villain.
Other artistes of the film are Nazar, Rahul Dev, Vanita Vasu, Komal, Fighter Babu, Rajanna, Manmohan Rai etc.
Puneet Rajkumar is the youngest son of legendary Kannada actor late Dr Rajkumar and Parvathamma. He got an easy entry into filmdom like his elder brothers Shivaraj Kumar and Raghavendra Rajkumar. He is one of the highest paid actors in the Kannada film industry.
'Natasarvabhouma' Rajkumar is known as the John Wayne of South Indian Cinema. Rajkumar is the only Indian actor who has fetched the National Award for both acting and singing.
Former child artiste Hansika Motwani made her big screen debut in the Telugu film Desamuduru directed by Puri Jagannath. She played a Sanyasin opposite Allu Arjun in the action-packed romantic entertainer. According to reports, before the release of her first film, she had signed another Telugu film for a whopping amount of Rs50 lakhs.
Hansika is doing her A levels (equivalent to the 11th grade in Indian Education system) from University of Cambridge at Podar International School, Mumbai.
She made her foray into films as a child artiste and gained fame in Jaago, Abra Ka Dabra, Koi Mil Gaya, Escape From Taliban etc.
Hansika has already played lead roles in different language films like Hindi, Telugu and Kannada, even before turning 17.
Her performances in television serials Kyunki Saas Bhi Kabhi Bahu Thi, Desh Me Nikla Hoga Chand, Shakalakaa Boom Boom, Tum Bin etc. has made her a household name.
She has appeared in many commercial television ads of big brands like Pepsi, Samsung, Hyundai, Bournvita, Onida, Amul etc.
Born on Aug.9, 1991 as Hansika Pradeep Motwani to Pradeep, a businessman and Mona, a dermatologist, her mother tongue is Sindhi. Her mother's client actress Juhi Chawla recommended her to act in films. She signed her first Hindi film Yahoo with Govinda and the project was abandoned. But the ominous beginning in her career did not stop her from acting.
She made her Hindi film debut as a heroine opposite Bollywood singer-composer-actor Himesh Reshammiya in Aap Kaa Surroor: The Movie: The Luv Story. The film was an average success at the box office, putting her in the top ten leading Bollywood actresses category.
Hansika will play a killer's role, taking revenge for her family in the forthcoming Hindi film He: The Only One opposite Mimoh Chakraborty, son of National Award winning actor Mithun Chakraborty.
After Bindaas, Puneet will start working in his next project, directed by Prem, who has given mega hits like Kariya, Excuse Me, Jogi etc.
His forthcoming film Mayura is a remake of the superhit starring his father. He was born at the time of the making of the original Mayura.
Puneet is an actor who has given nine consecutive hits and Hansika is an actress who has never tasted failure. Will they repeat their earlier success with Bindaas? Cinegoers expect that the fortunate hero and comely heroine will make Bindaas another smash hit.
Posted by KK Moidu at 7:02 PM